We’re not talking about having strong muscles or being better than others, rather, creating real, true heroes that can go out into our world and make it better. Learn more

Learn how to wish

All children (and sometimes grown ups) struggle with getting what they want out of life. This show will put the audience on the right path to discovering their own innate wisdom of manifesting their wishes. Learn more

Your wish is my command

The genie will show you the secret to getting what you want – literally, he is the genie of the universe – whatever you wish for the universe will grant. Learn more 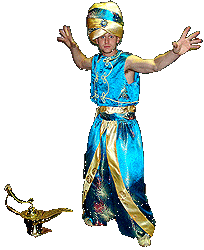 Constantly developed over the years, Aladdin is guaranteed to feel modern, fresh and relevant.

There’s still the story that everyone is familiar with, and characters both new and old. You’ll love how we’ve modernised and Alpha-ised our version. Learn more

Alpha’s Aladdin is a spectacular musical rock concert for children and grown ups of all ages. The show brings together the classic tale with a hilarious modern take, as well as integrating magical and important messages that help to raise understanding and awareness in all audiences.

Bring children and grown ups from any background or of any age to help them grow in their love for theatre, comedy and life as well as the magic of manifesting their dreams!

Imagine the power of learning this skill of how to really create your life the way you want it! It’s very exciting! This isn’t some new age rubbish about using your mind to attract what you want. The show instead looks at what blocks people from their dreams – their unhealed emotional injuries from their environment. As a homeless boy on the street, we can use Aladdin as an example of how to overcome adversity even from the lowest of existences.

The show builds on from the other shows – now that you’ve let go of things that don’t serve you, like silly beliefs about yourself or the pain of your past, now it’s time to get going and manifest what it is you want out of life!

Outcome: To bring an understanding of how to move on from the hardships of the past and make your dreams come true – in reality.

The idea of just ‘imagining what you want’ every night and magicaly getting it isn’t real. Of course, the Genie is a fun way to explore the ‘what if’ of that scenario, but Alpha believes in HARD WORK and setting goals. But behind all that – what if you felt deep down that you were worthless or a nobody? Do you think you’d want to go after what you want? Doubtful. If we can take a few steps towards showing the children something they already know inherently, that they deserve to have all of their dreams, think of how wonderful life would be, and how life’s bumps would seem less potent. This is the promise of learning about how to make wishes, from the heart – not from the head. If you be truthful to yourself and others, and face up to whatever you have to about yourself, whatever you don’t like, then you can let go of some of your old concepts of yourself and truly start to make life magical!

Alpha’s Aladdin accomplishes this introduction to one of the secrets to the universe. It does it so that children can get an experiential feeling of what it means to truly wish for things or whatever you want in life, and actually move towards getting it, instead of living a life believing ‘only lucky people get what they want’. Download Curriculum Documents

If you are booking at this rate for only a few grade levels, you are encouraged to get other year levels on board to make up the numbers to at least 120, to save you money per student