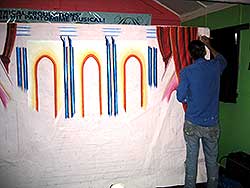 We are lucky enough to again have Phil paint the backdrops for all our shows, his style now being famous to the huge Alpha audience alumni!

We use a unique method for designing and drawing the picture on the canvas, involving tracing and an LCD projector.

Each design is either hand drawn by Phil, or we trace in a design and then project it onto the canvas/set. Each scene for Sleeping Beauty had 5 canvases/designs, compared with only 3 in each scene for previous shows. This was because we also had a more interactive set, with a dungeon, and a cottage with doors, as well as the entire set being wider to accommodate the majority of venues being quite wide. This will mean a more aesthetically impactful set for our new show for 2005.

Here’s what Phil has to say about painting backdrops:

There are many ways I am sure of painting great sets, however here at Alpha we have found some ways of making the job as quick as possible. 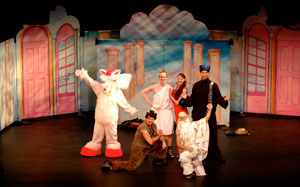